United Way Tocqueville Society began nationally in 1984 to honor individuals who have demonstrated extraordinary commitments to philanthropy through their passion for investing in the community and making a difference – personally and collectively. The Tocqueville Society was named in celebration of the vision of French historian Alexis de Tocqueville, who was recognized as a symbol of the true spirit of volunteerism that lives in America’s heart.

Tocqueville recognized, applauded and immortalized North American voluntary action on behalf of the common good. In 1835, he wrote, “I must say that I have seen Americans make a great deal of real sacrifices to the public welfare; and have noticed a hundred instances in which they hardly ever failed to lend a faithful support to one another,” eloquently capturing the essence of personal philanthropy that persists to this day.

The Tocqueville Society is comprised of individuals who contribute at least $10,000.00 annually to a member United Way. Today, there are nearly 400 Tocqueville Societies across the globe that have collectively raised over $529 million dollars from nearly 25,000 individuals. Specifically, these societies:

• Change lives through philanthropic leadership focused on the building blocks for a better life: a quality education that leads to a stable job, income that can support a family through retirement and good health.

• Strengthen local United Way leadership by building a network of like-minded leaders across the globe. 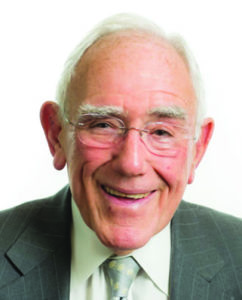 The Tocqueville Society at UWNCM was founded in 1996—25 years ago—thanks to the inspiring leadership of Ron Ansin, a local philanthropist and business leader who was involved with UWNCM for over 50 years, including serving on our Board of Directors and as Campaign Chair for many years.

Ansin was approached by former UWNCM campaign chair John Brisbois to brainstorm new fundraising ideas and recalled an event he had attended while visiting his brother in Florida. Held at the home of singer Julio Iglesias, the event honored the founders of the United Way of Miami-Dade’s Tocqueville Society.

“When I learned how positive an impact the Tocqueville Society had on United Way’s fundraising in Miami, I thought it was an idea worth exploring back home,” said Ansin. After discussing the idea with Phil Grzewinski, then CEO of UWNCM, Ron generously offered to match dollar for dollar any new Tocqueville gifts to our United Way.

Soon after, the UWNCM Alexis de Tocqueville Society was launched. Today, our Tocqueville society is the largest among our size United Ways in the country, thanks to the vision and collaboration of Ron Ansin, John Brisbois and Phil Grzewinski.

Change Location
To find awesome listings near you!
Go to Top